David Shepherd's work is an exceptional and rare homage to the English countryside by one of the foremost animal painters of the 20th and 21st century. Renowned for his dramatic depictions of big game, ‘An English Landscape’ is something of a departure for Shepherd, celebrating the environment and season rather than a particular species. The atmospheric panorama is dominated by a copse of majestic oak trees, silhouetted against a vast winter sky with the huntsmen and horses providing a dramatic perspective.

Shepherd originally embarked on a career as game warden but became a full-time artist under the tutelage of landscape painter Robin Goodwin (1909-1997). A prodigious natural talent, Shepherd’s subject matter ranged from portraits (notably the Queen Mother) to steam engines, but it was his passion for wildlife, and remarkable ability to render it on canvas, that defined his hugely successful career. He was awarded an OBE in 1980 for services to conservation and set up the David Shepherd Wildlife Foundation in 1984 – a proportion of the proceeds from the sale of the present work will benefit the foundation. 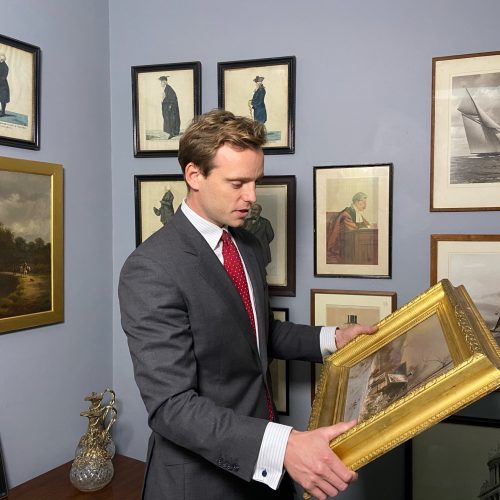